Freewaregenius.com
Home Windows Audio Play or pause your music or videos with a wave of your...

Flutter is one of those rare finds that is just absolutely fun and brilliant in it’s conception. It is a program for Windows or Mac that will let you control your media with a wave of your hand.

If you have a webcam, Flutter will monitor to and respond to your hand movements, Kinect-style, in order to control your media player.

It’s pretty easy to use, doesn’t require a whole lot of setup or expensive hardware, and works better than you might think a novelty would.

Ever been at your laptop watching a movie or listening to music, and you had to pause the playback but didn’t have a hand free to do so?Ever been in the same situation and been annoyed you had to find the right window or Alt-Tab out of an active full screen program to get to the media player? Or perhaps you are part of the ‘never do more than absolutely necessary’ crowd and you want an easier way to control your media player.

Flutter takes care of all these concerns with a wave of the hand, like magic. It turns your webcam into a remote control for your media player, that is controlled with your hand moving into the cam’s field of view.

The process of installation takes less than five minutes and since there’s only one gesture you have to learn, the tutorial is pretty quick and easy too. Basically, you can run Flutter alongside of iTunes, Spotify, Windows Media Player, Winamp (and perhaps even other) media players and use it to pause or start playback at any time. It’s available for Mac and Windows, both, and the process is the same no matter what operating system you are on. You will still have to create and manage playlists, and you can’t use Flutter to advance or rewind the list or anything other than play or pause (yet) but even so it is very useful and doesn’t take up a whole lot of resources. I use it quite often now when I am playing a game and want my own soundtrack or when I am watching a movie from more than 3 feet away and don’t want to get up to hit the space bar for pause when my cell phone rings.

I found that light plays a big part in whether the program actually works or not. You want, ideally, to be in a room with plenty of light, like and office or well lit library. Trying to get it to work in a darker room will be slightly problematic, depending a lot on the angle of your hand to the webcam and of course if you have a more expensive web cam and computer you may see slightly better, more reactive results. Even with a darker room and a built in webcam instead of a fancy standalone model, I was able to get it to work pretty consistently, which is more than I would have expected from a program that is, essentially, a novelty or toy. I personally found the best way to get it to work 99% of the time was to put my palm up, facing the cam, then slowly move it closer or further away until the media stops or starts, depending on what you were trying to accomplish. It’s such a simple, yet genius way to make use of the webcam that comes installed on so many laptops these days, not to mention other systems that have a webcam. Personally, I can see myself using the Flutter program for a long time to come. I am hoping in the future it will become more sophisticated, with added functions like Forward or Back progress on a play list or perhaps shuffle and repeat options as well. Until then, however, it is still a great way to start and stop my media player when I have something else going on. Until next time, my friends.

[Thanks go to reader Panzer for the tip about this software].

Get Flutter for Mac or Windows here. Works with iTunes, Spotify, Windows Media Player, Winamp and possibly other media players 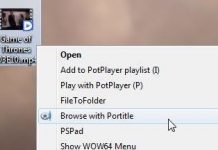