Are you missing Freewaregenius and wondering what we’ve been doing for the past several months? One project I’ve been working on is: “The Ballerina Monsters”; written and illustrated by my friend Kate Ledogar. What it is is a series of children’s book apps for Android and iPad that your children (and yourself) will love!

Elspeth,  Philomena,  and Cybeline are identical triplets that, having been once taken to the ballet, fell in love with it, and have insisted on wearing ballerina costumes ever since. The girls live with their mom while their dad, an astronaut, completes a six month mission on the dark side of the moon. I first encountered “The Ballerina Monsters” around two years ago when my wife and I visited my friend Kate and her husband near Boston, and she showed us some delightful drawings of a children’s book she was working on which centered around three mischievous girl characters she called “The Ballerina Monsters”. Kate was trying get her stories published, but the Ballerinas may just have been a bit too mischievous for traditional publishing houses, and I made the comment to that perhaps she should try publishing these herself as apps. A year later, I got an email from Kate asking about self-publishing, and to make a long story short we are now publishing the Ballerina Monsters series in partnership: Kate doing the writing and illustration, her friend Marco Werman (of Public Radio International) doing the narration, and myself doing the sound effects and animation and dealing with the outsourcing of app development.

The apps are currently available for Android and iPad, and will be available for iPhone in the coming few weeks. Check out video previews below.

In Space – The Ballerina Monsters (preview) 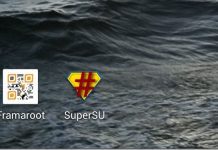 Looking for the absolute easiest way to root your Android? Check out ‘Framaroot’