Want to give your kids an early advantage in life? You can do it by exposing them to the concepts of programming and logic that lie underneath everything digital, and what better way to do it than to make it an easily accessible, fun game?

This is what Hopscotch, a free app for iPad, tries to accomplish. It centers around a number of fun-looking, cartoonish characters that can be programmed to perform on-screen actions in response to user inputs (such as tilting the iPad in several directions, shaking it, touching the screen, etc). All of this can be done using a simple, easy to learn visual programming language, and all actions can be performed and programming via dragging and dropping. To put Hopscotch to the test, I gave it to my ten year old to test drive for me. Aside from his obvious thrill that I am actually prompting him to use the iPad (as opposed to my usual role of limiting his time on screen), he predictably go into it instantly, and was able to figure out the basic logic without any explanation whatsoever on my part. A caveat, though; my son has been previously exposed to similar tools; “this is like Scratch”, he said, and I agreed.

So far so good, but it was soon obvious that my son could not do much that was complicated without my intervention. For example, although he could make the character move in one direction, grow or shrink, and a few other pre-programmed actions, it was less intuitive to figure out how the character could mirror the iPad movements or draw a line, not just for him, but for me supervising him. At one point I got the feeling that although the app was very nicely designed and easy to get into, it could have been more intuitive still, so adults would not have to be involved so quickly, and more powerful (with more functions, such as ‘flip’ for example).

Eventually, it dawned on my that ‘Hopscotch’ was not like ‘Scratch’, as my son had thought, or a game creation engine for kids (such as Kodu, which my son loves), but more like the old ‘Logo’ language for kids. Some of the most rewarding things you can do with it is create illustrations, or have your cute cartoon characters work together to create illustrations while simulating interaction between them (as in the screenshot below, from one of the demo projects that are included in the Hopscotch install). Hopscotch is both free and wonderful, and can grab your kids’ attention for a long time and teach them something in the meanwhile. But it can and should be better; I know this because I’ve seen my kids interact with many such a tool (on PC or in the browser), and there are less beautiful and attractive tools out there be more engaging to them (such as Robomind for PC and Mac (also free).

See it in action below:

Which is not to say I don’t think you should download this immediately and give it to your kids. I do. I am also hoping that it would be available on Android devices soon. [Thanks to my good friend ‘Diablo’ for the tip about this tool]. 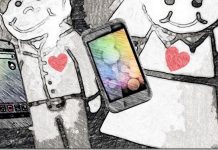 Viber comes to Windows and Mac, allows free calls and texts from the desktop